Discover the top downtown Phoenix Museums. They include those focused on the arts, science, and the history of the Valley.

Some of our top picks include the Arizona Capitol Museum, the Arizona Science Center, and the Heard Museum. We also included some cool hidden gems such as the Phoenix Trolley Museum and the The Gallery @ City Hall.

Address: 1700 West Washington Street
Hours: Monday thru Friday 8 am to 4:30 pm; Closed on Saturday and Sunday

The Arizona Capitol Museum offers you the chance to learn about the history of this amazing state and everything related to Arizona. Learn about the local minerals, fossils, and gems. See what the courts and government building interiors looked like in the early 1900s.

One of the most popular exhibits is the one on the USS Arizona: Flagship of the Fleet. The ship was sunk during Pearl Harbor, but they have memorabilia and artifacts from it on display.

If you are with the kiddies, they are going to love the 7-foot long US flag made only out of Lego pieces! You can make a game out of it and see if your kids can count them all...here's the answer just in case you don't have a few weeks to count them: There are exactly 114,006 of them!

These are just a few of the things you will find at one of the top downtown Phoenix museums.

Address: 122 East Culver Street
Hours: Tuesday, Wednesday, and Thursday 10 am to 3 pm, or by appointment

The Arizona Jewish Historical Society is dedicated to exploring everything related to Judaism in Arizona and this museum has pieces from all over the world. It has exhibits, live talks, concerts, and so much more.

Some of the exhibits focus on the Holocaust, what is happening with the Jewish culture in Arizona and beyond, and much more. They are proud to be a museum for anyone who cares about each other, no matter their belief system.

This wonderful museum examines and promotes art, music, and exhibits about the Latin culture in Arizona. It's dedicated to promoting equality, understanding of the Latin culture, and expanding consciousness between peoples.

We feel the cultural center is a worthwhile visit to learn more about the original people who populated this state and their past, and ongoing, contributions to it. These are some of the reasons that make it one of the top downtown Phoenix museums.

This is one of Jill's and my favorite downtown Phoenix museums for kids and younger adults. The Center has loads of hands on exhibits and interactive areas so your little ones can run and have fun. And, since I'm sure you are a kid at heart also, you'll be able to do lots of these things with them.

Some of the activities here include seeing the MASSIVE "Victoria T. Rex" fossil/skeleton and dinosaur exhibit. You can also check out the 360-degree Planetarium, pretend to fly planes at the American Airlines Flight Zone, and so much more.

This is another one of the perfect downtown Phoenix museums if you have little ones with you. The museum is set up for kids ages 0 to 10, and there are loads of fun events and exhibits for them and your entire family.

Some of these include a huge jungle gym/slide area, a section for arts & crafts, and all kinds of other fun places to play both inside and outside. There are even special events like "snow days" where they will bring in snow for you and your kids to play in during your day.

With more than 1,000 pieces of art ranging from the early 1920s to the current day. All of these pieces are from the City's historic archive, which makes this gallery unlike any other in the city. One of the reasons is that the exhibits are constantly changing, so you'll always find something new.

Some of the artists, and their artwork, are world famous, while others are lesser known but still beautiful and worth seeing and enjoying while you are here.

This is one of the free downtown Phoenix museums and worth a stop if you have about an hour of free time.

George Washington Carver was a humanitarian, scientist, and a highly respected professor. He was born a slave and then became the first African American in the USA to earn a Bachelor of Science.

Not only did he create many agricultural inventions including the now always used "crop rotation" method of growing food. He also taught people about African American culture, civil rights, and more. He was also known as "The Peanut Man."

Find out more about his life, his contributions to make our world a better place, and how he received such a funny nickname. It's one of the top downtown Phoenix museums. 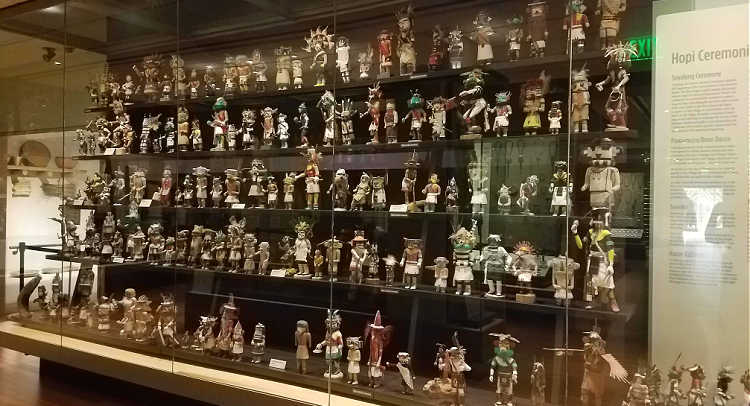 Address: 2301 North Central Avenue
Hours: Tuesday thru Sunday from 10 am to 4 pm; Closed on Mondays

This is without question a must visit when you are looking for the best downtown Phoenix museums. For anyone interested in Native America culture, this museum will answer many of your questions. It is dedicated to explaining how American Indian people lived here in the distant past and how they made art, did ceremonies, and kept their culture alive.

The Heard also has traveling exhibits that examine how native people are dealing with today's world and how they are adapting to what is happening in the current moment. There are so many exhibits, ranging from artwork to full-sized huts and houses, that you could spend two to three hours here without seeing everything.

>> Read more about visiting this museum

You may not be expecting a trip to Ireland when you visit Phoenix, but going through this museum, you'll think you are there.

You can learn about how the Irish came to and influence culture in Arizona, see the "Book of Kells" which is one of the few color replicas of the story of Jesus' life according to the Four Gospels, and of course enjoy special events such as St. Patrick's Day and Easter.

They also have special tours if you want to learn more about the museum and Irish culture throughout Arizona. It's another one of our favorite downtown Phoenix museums.

This renovated building is beautiful inside and out (even if it is a jail!). There are exhibits that will show how the justice system works using interactive displays of famous cases throughout the county. One of the most famous is of Ernesto Miranda vs Arizona.

If you've ever watched a cop TV show, or movie, you've probably heard them say, "You have the right to remain silent" among other comments when they arrest a suspect.

This is based on a case won by Ernesto Miranda after the police in Phoenix forced his confession. Their process was determined to be illegal by the court system. Learn more about his court case and how Miranda Rights turned into standard procedure for police forces around the US.

This is another one of the free downtown Phoenix museums.

This 285,000 square foot building is loaded with over 20,000 pieces of art. What we love is that it isn't only from artists in the state or about the state but from all around the world. The collections here range from thousands of years ago up to the most contemporary you will find anywhere.

Since there are so many pieces of art, you are bound to see something new each time you come here. And, even if you've seen it all, they are constantly having traveling exhibitions from some of the top museums, and artists, around the world.

It's one of the most visited downtown Phoenix museums.

Pull over and check out this cool museum! You will see lots of exhibits, starting from the olden days of the wild west here in Phoenix, and moving forward.

Some of what you will see here include exhibits with the old uniforms and guns, the "Tin Lizzie" which is a classic "Model T" police car, a helicopter and much more including "bomb robots!"

Something the little ones in your family will love is that they can actually get "sworn in" as police officers during the visit!

Focusing on the history of trolley cars in the city, this museum had 6 of the original trolleys left over from the massive fire in 1947 that burned all the others. You will see exhibits about these trolley cars, learn more about how the trolleys were so important to Phoenix becoming a metropolis, and how it delivered over 6,600,000 people around the city until the fire.

The tour guides will teach you all about the trolleys, and there really is nothing like seeing these old trolleys and taking a photo or two beside them. You can become part of history, and since light rail is making a comeback in the Valley of the Sun, part of the future.

It's one of the best downtown Phoenix museums for your entire family!

Heritage Square is where the Rosson House is located and it is a beautiful area with brick buildings, a nice courtyard, places to eat, and some pieces of art around it. If you just want to relax and enjoy some sunshine, it is definitely a place to visit here in the city since it is so calm and relaxing.

Now, on the other hand, the Rosson House is one of the spookiest of the downtown Phoenix museums. This building looks like a perfectly restored 1895 Queen Anne Victorian from the outside but looks can be deceiving. The Rosson House is known to be haunted and you may just experience something supernatural when you go in it.

Note: You can only visit the Rosson House Museum on a tour and tickets must be purchased online in advance.