There is no place that Aram and I would rather be than enjoying the perfect Phoenix weather in December. Not only do you have your choice of sporting events, but it's a great time to explore both our indoor and outdoor attractions.

We love to just walk around, enjoy the scenery, realize that we are lucky enough to live in a city where December can be as nice as anywhere else in the world. This is especially true since there is almost no humidity so unlike other warm winter climates that usually have high humidity, you won't be sweating and feeling worn out in just a few hours.

In fact, you can go hiking with shorts and t-shirts on and you'll feel great. You may actually want to wear tights or gear that is a little warmer since it honestly does get a bit chilly.

The December weather in Phoenix is truly magical.

There are so many reasons to love the Phoenix weather in December that it is hard to even put them all into a single page. Some of our favorite activities this time of year include hiking, climbing, going to concerts, taking walks or Segway tours, going on tours to cities like Sedona or Flagstaff and even taking a tour all the way to the Grand Canyon and back in just a single day!

Being that it is still sunny, and warm, it is great to be outside and not have to worry about getting sunburnt or dehydrated nearly as much as during the incredibly hot summer months here. We still recommend carrying a water bottle or stopping to get a drink whenever you start feeling it a little bit, but don't stress too much.

Another reason we love the Phoenix weather in December is that it is totally comfortable wearing pretty much any type of clothing that you want to during the day. You could easily wear pants, jeans, skirts, dresses or anything else you like to wear on a nice sunny day. To be honest, you might even want to bring out a light jacket or sweater for the nights when it starts to really cool down.

Yes, if you are from the north, you are probably laughing at that last sentence since your idea of cool or cold is totally different than the ones that us locals have during December. That's okay with us since we are used to it and welcome you to take advantage of everything this gorgeous city, and state, has to offer you! 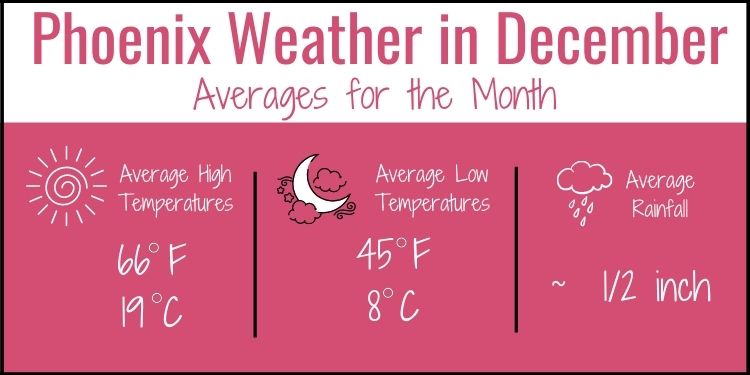 Our days warm up into the mid-60s this time of year. You will find it a bit cool at night with temperatures dipping into the mid-40s overnight.

Since the humidity is so low in Phoenix, and Arizona, you don't really have to worry about the rain. Therefore, don't bother packing for it or bringing anything that you would need in wetter climates. That is just another benefit of living in a desert climate and having low humidity! That being stated, there can be some heat waves or some cold snaps, so make sure to check ahead.

Disclaimer: I receive a small commission from some of the links on this page.

What to Wear for the Phoenix Weather in December

This is actually a bit of strange month to figure out what to wear since the temperatures are usually very mild and comfortable, but there can be a heat streak or a cold snap, and you want to be prepared for that. We tend to move back and forth from shorts if we are going to exercise, and maybe tights if it drops below our comfort level. The same with shirts when we are exercising as they are short sleeved, but we'll adjust and move to longer sleeved when we are exercising in the morning or late afternoon.

As for just general day wear, pants, jean, skirts and dresses are all acceptable as long as you feel warm or cool enough. Shoes are generally going to be casual like tennis shoes or sandals. Anything less than that might give your feet and toes a bit of a chill and that isn't comfortable especially if you are standing on your feet for a decent amount of time in a museum or at an event and want to walk around them.

Here are some more in-depth suggestions for both women and men as to our experiences and knowledge as locals to better get a grip on Phoenix weather in December.

Shirts: Since the weather is usually quite mild, pretty much any type of shirt will work while on your vacation in The Valley. I tend to wear longer sleeved shirts in general, since I run a bit cold, and they work perfectly for me. I definitely wear them in the morning or evening for the same reason. If the temperatures start to move up to the warmer end of the scale, I'll drop down into a short-sleeved shirt or something like that. I often wear a light jacket or sweater at night since I prefer to bundle up and be able to remove them if I get too warm compared to being cold and not having enough to be comfortable. I'd suggest packing shirts like these and possibly a light jacket.

Dresses and Skirts: I will mostly wear skirts during this month. But even more so, I'll start wearing longer dresses that have sleeves on them since the Phoenix weather in December can drop quickly at night. I definitely prefer to be a bit warmer than most so if I do wear a skirt, I might even wear tights underneath them or stockings. I prefer tights just for the comfort but whatever suits you best is fine.

Pants/Jeans/Shorts: Any of the three are acceptable during your stay in December. I personally prefer to wear jeans and pants because I like to stay warm. I'll wear shorts if we get a bit of a hot spell, but that is probably going to be it. If I want to stay cool, I'll wear some lighter linen pants, but I usually just wear normal pants. As for jeans, I love heavy ones during the mornings and evenings, and might even wear them during the daytime depending on what I'm doing and how warm the day is going to be. Of all the choices, I prefer jeans since they are so easy to wear, warm, and fit pretty much any situation.

Shoes: I prefer tennis shoes at this time of the year. Sandals are okay but flip flops are a no go for me as they aren't sturdy enough to provide the comfort in comparison to the lack of insulation. Sandals, which still can be quite cold, are sturdy enough for me and let my feet breathe at the same time. That all being said, tennis shoes are my automatic unless it's an unusually hot day. As for going out, I will wear nicer sandals or closed toe shoes. Again, since Phoenix is so casual in most locations, you won't have to worry about that issue.

Shirts: Aram tends to run a bit hot, so he still prefers shorter sleeved shirts in December. That being stated, he will wear some tights or tighter short sleeves if he is going hiking or climbing. He might wear short sleeves if he is going to work up a serious sweat, but that is unlikely (it is unlikely he'll work up a serious sweat since he'd rather watch football instead). As for during the day, his go to is still a light long sleeved shirt and could switch to a thicker one if it looks like a cool spell is coming in at all.

Pants/Jeans/Shorts: Aram will sometimes wear shorts during this month, but he prefers to wear pants because the Phoenix weather in December is cool enough to do that. He will also wear pants, occasionally, if the temps are dropping but he prefers to dress lighter and then carry a sweatshirt or light jacket to warm up if needed. I would suggest wearing jeans and pants, and maybe some tights if you are going out early or late, but shorts may work for you if you tend to run on the hot side of body temperatures like Aram.

Shoes: This is pretty much the same as the women listed above and what I wear when I'm out. Aram prefers tennis shoes and maybe some thicker sandals, but there is no chance he's going to wear flip flops or something that is open-toed. It is just too chilly for him and he'd rather have warm and comfy feet since we tend to get outside more, go for longer walks, and it would just get too cold on his toes and feet. When we go out, he'll usually wear tennis shoes or maybe dress shoes if he wants to go out to somewhere special and dress to impress.

5 Things to Do in Phoenix in December

1. Christmas: As with other major cities, Christmas is always going to be a fun and exciting holiday in The Valley. Some of the special activities this time of year include a special show at the Phoenix Zoo, Christmas in the Rainforest at the Butterfly Wonderland, a spin around the CitySkate Holiday Rink, and so much more!

2. Arizona Cardinal's Football: The Cardinals usually are playing a game or two during this month. Since the Phoenix weather in December is so comfortable, this is a great time to get outdoors, watch some gridiron action, and cheer on the local team. Or, if you are a fan of the team playing against them, cheer them on instead!

3. New Year's Eve Celebrations: Ring in the new year at one of the many magical Phoenix NYE events. If you want something relaxing, check out the Symphony. For those that have little ones, the Noon Year's Eve at the Phoenix Zoo will be perfect. And, if you want to party for two straight days, check out Arizona's biggest New Year's Eve event, "Decadence." You can imagine what that event is like just by its name alone.

4. Ballet Arizona's The Nutcracker: There is nothing more magical than the famous Nutcracker musical. With over 150 performers in this show, it will be a spectacular that you, and your kids, will never forget. There are also special family friendly events where you can buy treats and gifts for the ones you love.

5. Shopping: Last, but certainly not least, is shopping for gifts for your family, and for yourself if you are so inclined, to give out during the holidays in December. The Valley has many choices of malls, museum gifts shops, art galleries and more for you to get something special during this month. The great thing is that the Phoenix weather in December makes it so much easier to get around compared to other parts of the USA that are in the middle of a freezing cold and snowy winter!